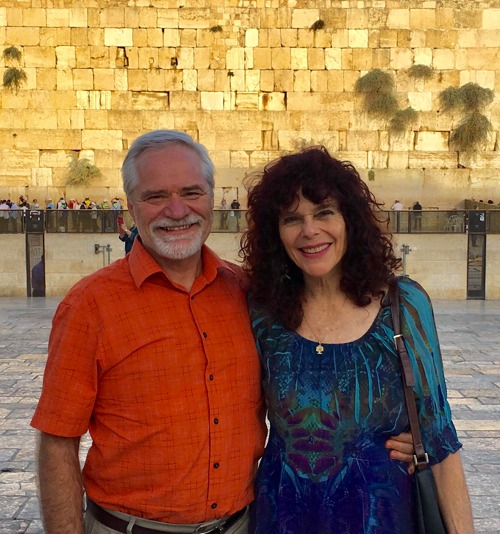 We are Israeli-Americcan citizens living in the Galilee, sharing the love of Yeshua, Jesus, with Israelis. Richard is a Christian from Plainview, TX who had a divine encounter with the G-d of Israel and like Ruth, committed himself to the people and the Land of Israel. Carolyn was raised in an Orthodox Jewish synagogue near Chicago but years later, as a new age hippie, had a vision of Yeshua that transformed her life and she’s now a Messianic Jew. So together we are a prophetic picture of the Heart of G-d, which is one new man in Messiah.

We planted a Messianic congregation in San Antonio, TX where we served for many years and then Adonai called us to Germany where we still share Messiah in German public schools. We praise Adonai for the many German youth who have come to faith in Yeshua!

In 2003 we made Aliyah, immigrated to Israel and became citizens. We are very active in sharing our faith in Israel and Carolyn is involved in worship in various venues in the Land, making music videos and worship CD’s: Just Like Joseph (contemporary worship), Deep Calls to Deep (peaceful soaking music), The Latter Rain (contemporary songs for the prodigals) and Fine Linen (worship with a touch of the blues).

Over the years we have often been called out of Zion on ministry journeys and prayer-walking in strategic locations. We also do Aliyah counseling, encouraging Jewish people to come home to Israel. In addition, we welcome Christians from around the world into our home for worship, sharing testimonies and serving dinner on our rooftop with a gorgeous view of the Kinneret, Sea of Galilee!

We work with our two sons, Ariel and Avi and the Media Team in Haifa, doing street outreach and creating evangelistic videos and pro-life videos for social media. Perhaps you have seen our Isaiah 53 Forbidden Chapter video? We are excited at how the L-rd is moving on the hearts of Israelis today, fulfilling His promises that Kol Yisrael Yivasha – All Israel Will Be Saved!

Here is a brief video that describes what we have been called to do:

And here are two music videos with some of our worship music – enjoy and thank you for prayerfully considering us coming to minister:

* Writing L-rd or G-d this way is an ancient Orthodox Jewish custom that Carolyn grew up with. It’s only done out of reverence and honor for His name, so thank you for understanding.